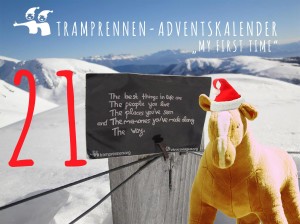 You can barely call it „hitchhiking“ when I first decided to stand by the road and hold my thumb out, hoping for somebody to pick me up.
It was in August 2011, after I just quit my physics studies, so I had a lot of free time and not much on my mind as I didn’t have any university related obligations. One of the best things to do with free time is travelling so I decided to travel Germany and visit all kinds of friends.

One of those travels brought me up North to Hamburg, where I visited a friend who studies at the armed forces. This puts me in quite a strange and interesting position, as I also stayed in the barracks. He told me that one of his friends just moved out, so I even had a room all for myself. In the following 3 days I had some odd and interesting talks and encounters, as well as some irritated reactions due to my clearly visible non-belonging to the armed forces. However those 3 days are a different story and can be told another time.

After those days, in which I also saw a lot of Hamburg itself, and which marked the longest period I have spent in this city so far, I decided to go back to Berlin. The only question was how I would get there. At this point of time I normally just looked up a rideshare, as it was well organized and quite reliable – but I was in adventure mode. I had time to spare, the road to Berlin is well travelled and I had a marker pen – all was set for the first hitchhiking experience of my life.

The fact that I even considered it, was mainly related to getting to know some people of Viva con Agua some months earlier at the World Water Day in Berlin. After some events and meet ups with the VcA group of Berlin I realized that hitchhiking is quite a usual way for many of them to travel. For me the feeling about hitchhiking was mainly coined by my sheltered and wary upbringing in the Thuringian country side.

My preparations were quickly finished – I got some old cardboard from a pack of Sherry in the barracks and looked up the best places to hitch to Berlin from Hamburg on Hitchwiki. Because the road is much frequented I didn’t have to look for long to find a good spot to start from – a roundabout right at the access road to the highway to Berlin, called Horner Kreisel. All that was left was find the best way to get there from the barracks by public transport, which was just another quick lookup and I was ready to go.

When I arrived at the roundabout the spot to put down my stuff and wait was easily identifiable by a vast number of stickers and writings on a big column, which clearly marked the place as the hitchhiking spot I was looking for. For the drivers, a bus stop just some meters behind the column was the perfect place to stop and pick up people. With some insecurity still in me I began to write the letters “BERLIN” on my cardboard. Next was the moment in which I realized that I’m really doing it, I’m hitchhiking and so I stood by the road, board in front of me, thumb out, and more or less smiling at the drivers passing by. Just about three minutes after I held out my thumb a Mini Cooper was coming to a stop at the bus station. With some disbelief as to how easily that worked I grabbed my stuff and went to the car.

The driver, about 40 something, directly told me he is going to Berlin and if I wanna jump in. As my feeling about the guy was quite good I put my bags on the backseat and got in on the front passenger seat. What followed was about 3 hours of a relaxed drive and some nice and interesting talks with the guy, who told me that he was hitchhiking a lot himself when he was younger. This way he properly was way more experienced in the whole thing and he even gave me some tips as what to look out for. When we arrived in Berlin he dropped me near a train station and all that was left for me was to take the train to my flat.

This way, the first hitchhiking experience of my life ended and after all those thoughts I had before about security or insecurity, what kind of people would stop, if anybody would stop at all, what remained was a feeling of joy. The joy of having travelled with a certain amount of randomness, a feeling of freedom. Since then I hitchhiked quite some times and every time was different, all of the people, all of the places, but one thing always stays the same at the end of a journey – the graceful feeling that I got to know new people who share this world with me and who are ready to help other people.