How does it work?

As a participant / team

You are joining the race? Awesome! :-)

Now it’s the time to find donators – nothing easier than that! Just ask your family, friends, co-workers, the person sitting next to you in the bus,… if they want to support you and your team and help us raising money for Sea Watch e.V.! Tell them something about the race, the organizations, why we do it, why it’s a cool thing to do – maybe show them one of our documentations?

If they want, they can follow the steps and become your sponsor or even your owner! (what the heck is that? just click the right tab). Make sure to give them the link to the Liveticker and keep them updated from the road, so they can follow you being stuck on the road ;-) Maybe even send a postcard?

You want to support a team and the projects of Sea Watch e.V.? Also awesome!

The next steps are not very difficult – go to the team profile or choose your team by hand, decide if you want to be Sponsor or Owner (what’s that? see right tab!) and click “next” to be redirected to a betterplace-page. What’s betterplace? It’s a donation platform, that organizes all the money-transfer issue for us – and the best thing: it’s absolutely safe and works for social projects on the whole world!

From there it’s just a few clicks to support your team and the projects and get a big THUMBS UP from us and Sea Watch e.V.!

If you donate or people donate for your team, one thing is important: why is someone a sponsor, someone else a team owner? Cause it’s fun! Someone can become an Owner of a team, if she or he donates more than 100 Euros and noone got owner before him.
Why is that fun? – Well, on the one hand it’s of course a really good thing to donate 100 Euro for a good cause, on the other hand it gives you some power over the team – put a picture of you on the team profile, gamble a little bit with them so they will offer you something in return (popular: wearing t-shirts with your face, changing the team name, wearing a costume, …).

If you are a participant: maybe check if and what you want to offer a potential team owner. ;-) And of course also for a Sponsor (people who don’t become team owners) it’s nice to get something in return – postcards for example.

And a Godfather? Well, that’s not existing… yet.

Sea-Watch e.V. is a non-profit organization that conducts civil search and rescue operations in the Central Med.

Obviously it does. Like people and access to water, the world and the freedom of choice, or the ass to the (golden) bucket (german saying, don’t ask me…). Sharing ideals, energy for activism and sometimes the same people Tramprennen and Viva con Agua were connected from the very beginning. So it was obvious that the pure joy of hitchhiking and the competition in the race should be somehow connected with the goal of water, sanitation and hygiene worldwide. People remembered being young school kids once upon a time, stoic running circles around the school or a park to raise money for some charitable goal. The idea was born.

Since then, more than 75.000 Euros were donated by parents, grandmothers, grandfathers, families, jobs, factories, friends,…. to support their team of choice. A big THANKS to all of them!

Also, we decided to support another organization with 50% of the donations, starting with the Tramprennen 2015 – by name Pro Asyl, fighting for the rights of refugees and giving a voice to the disempowered. While most of us cross borders without noticing, always knowing that if anything bad happens there will be help, millions of people don’t even have a home, let alone without a voice that will be listened to. So it stands to reason that our ideals and the work of Pro Asyl are deeply connected and we are pleased to be able to support them.

In 2018 we decided to restructure our donation process. We are happy that we were able to support the work of two wonderful organizations and spread the word about clean sanitation and the necessity for refugee rights. But, we felt the need for a change and decided that this year we want to support one organization that is helping people across borders and rescues them in the most dangerous situations: Sea-Watch e.V.! 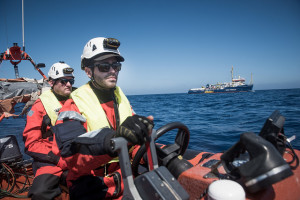 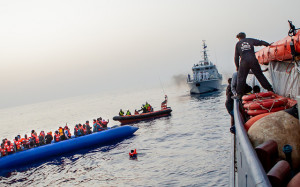 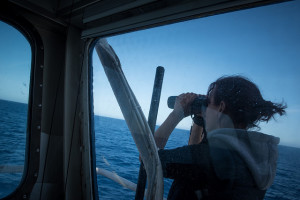