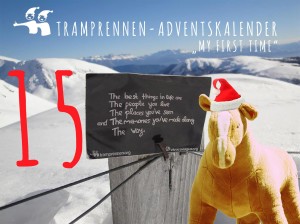 Ho,ho,ho- here we go! Christmas time is coming and before we hitchhike home for Christmas (haha…) we want to present you the first Advent calendar on tramprennen.org! Every day until Christmas (or even longer) we want to present one story about the first time we used the best way to travel: hitchhiking! Have fun with the stories! And you are more than welcome to add your own experience! Just send it to gro.nennerpmartnull@ofni! Whoop,Whoop!

Freiburg is beautiful, especially looking at it from the wooden tower at the Castle Hill. You have to get there first though. Starting in Hamburg. Hitchhiking. Your first trip using your thumb, at the first time – the first “Tramprennen”.

It’s Saturday at the end of the Summer 2008. Spain won the European Cup at Soccer, Kid Rock dominates the Hit Parade “All Summer Long”, eleven more or less absolute hitchhiking beginners with numerous backpacks stand in the drizzling cold Hamburg at the square in front of the “Millerntorstadion” in the rain. Start of the very first “Tramprennen”. I am one of these beginners. Two, two of these very large backpacks are mine. I have met my partner in crime Kiste three weeks ago. We both needed someone who wanted to join each other, so we formed a team. The stage goal: Go South for 800 kilometers, to Freiburg. Our preparations are finished: We each have half of a household on our backs, except for a tent, markers, sleeping mats, maps and other useful stuff.

The first kilometers: simple. We find the way to the city train, the bus, the gas station Stillhorn. The noise of the passing cars and the smell of a truck stop sausage stand provided highway atmosphere. The fastest way to Freiburg would lead down the A7. Yet we prefer the couple from Osnabrück, that spontaneously decided to give us a lift after Kiste talked them into it and so we pursue the path towards NRW on the A1. So my first lift ever is a spacious Camping-Van that proofed its suitability for travelling in the previous weeks in Skandinavia. Fantastic, I can get used to that. I start dreaming of Spanish beaches and wake up at the service area “Dammer Berge”. The parking lot is the exact opposite of my backpack: emptiness in good order. Eventually a decrepit Citroen gets lost on this space of tarmac and stops 10 meters in front of us. We run to it, passing the yellow license plate and the missing side mirror on the left to the driver. Our knowledge of French is as abandoned as the French rust bucket that only still drives because it always has. And as it drives, we do the same. Jammed in the back seats, we jog through the Ruhr area and enjoy the view of abandoned industrial landscapes and trucks passing us by at a spead of 80 km/h. Fuck it: We are moving, that’s what counts.

Time to call the other teams. It’s a race after all! The rest is everywhere but not close to Freiburg. We are trying our best but we won’t make it anywhere close to Freiburg, since the sun already calls the day. Our destination for the night: a place in Bonn, we organize on such short notice.

The next morning at the Rhine. The next motorway access is for us. Kiste talks a passing biker to leave us her map and so we see a lot of highways but none really useful. Still with two thumbs we test our luck. Soon several cars stop to take us to their destination but we want to go to Freiburg and not to the next bakery with breakfast. After some time we take carelessly lifts that promised to take us to so called hot-spots but turned out to be more or less just bummers.

We stand at the intersection, at the motorway access in Siegburg, at the train station in Siegburg and at the motorway access in Siegburg again. To reach the “Hitchwiki”-spot we have to take the tram and just walk a little to enter the service station. But Kiste promised some friends he would just hitchhike and not use any public transport. In the afternoon we almost start to feel like home in Siegburg. Some creative ideas come into our minds and Kiste makes a point by saying: “Ole, this here leads nowhere. Let’s take a taxi.” 20 minutes later and with 20 euros less in our pockets we arrive at a gas station next to the A3 and meet our first real lift for the day. We move quickly from there. Not even three hours later Freiburg appears in front of us. At least the outskirts. The highways avoid Freiburg so we wait for our last lift. We could take the tram but again, hitchhiking is far more fun! Finally we enter the last car on our trip. “Where do you want to go?! On top of the hill? With all your backpacks?” The driver knows the place and has doubts about our idea. The castle hill is the destination of our trip. Roughly 100 meters above us. Luckily the other teams organized a hostel at the foot of the hill so we put our backpacks there, run up the hill and take a photo. It took us two days, we made the 4th out of 5 teams but most important: we arrived!