It’s not even 2 weeks and already 15 teams registered for the race! Awesome! Maybe you’ve wondered why you can’t see most of the team profiles online on the website yet: Every team has to do some homework, before their profile will be published. Three hard workers made it in the meantime and sent their liability waivers and transferred the money for the Hitchpackage and their teams appeared online today! They are onlince since today! Welcome! Yeeahaw!

We received several mails of people asking for Hitchmates in the last days. We will provide a small platform for Hitchmate requests soon on tramprennen.org and hope all the people looking for someone to hitch with will find someone soon! Just give us a couple of days since we also need to do some homework which is on our priority list :).
Please remember: Every participant needs his own account to join a team. Login and click the invitation Link you received from your Hitchmate via Mail. Otherwise you’ll never complete the team registration and can’t take part in Tramprennen 2012 ;)

Some people were confused about choosing their routes. You can register a team and choose and switch your route as many times as you wish until August 4th. So don’t hesitate do register your team if you’re not sure yet which route you wanna hitch! There is still time to decide… :)

That’s it for the moment!
Cheeeers, Tramprennen 2012 Crew

It’s been a while and we know we’re a bit late since we announced the relaunch and starting the booster phase for team registrations for early June. Sorry for the circumstances, sometimes things take a little longer as expected…anyways, after months of preparations and all kind of thoughts we’re more than happy today to be back on the road and officially start the Project Tramprennen 2012 – with you! For us it’s always a special moment – and believe us, every single team registration that reaches our mailbox will put the biggest smile you can imagine on our faces! :) 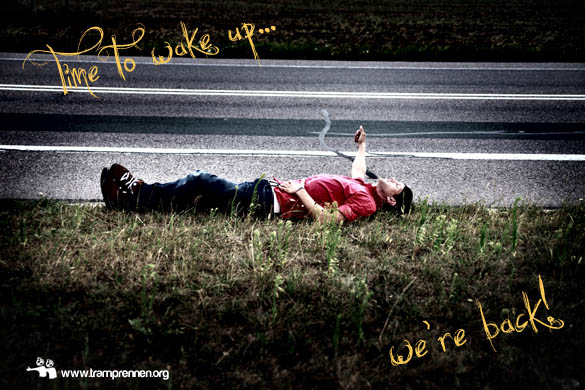 It’s the 5th Tramprennen this year for Viva con Agua and back in 2008 when we started the first race with 11 people to Spain, we never thought about such things like team registration and donate systems, we did not even think about a website to be honest. This year we prepared a race that suits for 150 potential participants! Isn’t that crazy shit?!??! =) We have 6 routes, starting in Germany, Danmark and Belgium. It’s the first time that Tramprennen really becomes an European hichhike race with hitchhikers from all over the continent!

And now: fire from all holes!!!

We want you to be part of Tramprennen 2012 and share two great weeks on the road with you! Register a team and race with many many other hitchhikers to Romania for Viva con Agua and a water project in India! It doesn’t matter whether you’ve hitchhiked 100000km or never before, doesn’t matter where you come from and how old you are (well, you should be older than 18 or hitch with your parents! ;)…)! Find a hitchmate and join us! We’re looking for you, looking forward for dumb-ass teamnames and profile pictures, looking forward for every single cent that goes into the water projects of Viva con Agua and last but not least to kick your ass on the roads to Romania! :)

What you need to know now

Check out the FAQ for further information and skim through the beautiful new redesign! You can register a team from now on! We’ll then provide you with everything necessary via mail.

These are the basic steps:
1. Find a hitchmate and register a team (one person needs to be male at least)
2. Do your homework: fill your team profile, send the liability waiver form, transfer the money for the hitchpackage
3. Choose your route
4. Find TeamSponsors and Owners for the WASH-Project of Viva con Agua in India :)

Behind the Website, into the Code and the future of this project

You probably wonder why it has taken so long for us to relaunch the website and everything you see is another design. The majority of the new stuff are backend functions that help us to organize the race sustainable and beyond Tramprennen 2012. Still, the website is now smartphone compatible and staffed with many more cool and helpful features.

Two years ago we implemented every team profile and sponsor manually, in 2011 they were already automatically. Same with mails. This year we can easily set up a new route with as many stages and possible teams as we want to. That means further, that anyone with a good reason can organize or request a hitchhiking race via our platform – the Hitchhiking Hub. Wouldn’t that be amazing, a hitchhike race in Canada or in Australia? The new plugin is able to realize this idea and can provide the technical background. A milestone in the evolution of the whole project for us. For the first reason, because we want to spread the word about hitchhiking – and there is no better way to do so with a hitchhiking race. Secondly, because we always wanna integrate new and interested people into the project Tramprennen and make it independet from a certain group of people (well,us :P).

In the future we’ll add more features on the hitchhikinghub.org. New ways of demonstrating the art of hitchhiking, blog systems for hitchhikers and probably even an app for smartphones where you’ll be able to track your hitchhiking trips without big effort.

It’s a big dream and we strongly believe in it: hitchhiking makes the world a better place. It builts friendship and trust among people all over the world. We think this is a good reason to keep working on such a project. And we’re happy to have you on board on this wonderful journey! :)

That’s it for the moment! Are you ready?!

There we go, the last two routes of Tramprennen 2012: Grover and Oscar the Grouch!
Starting in Berchtesgaden and Bayreuth, going through Austria, Czech Repuclic, Slovakia and the Ucraine till Romania!
Just a few steps are missing and we’re ready to relaunch our website and start registrations for Tramprennen 2012! So be ready, find your hitchmate and wait for news in the near future! We’re close! Rock’n’Roll :)!

1st stage: Neusiedler See (Austria)
Size: close to a village
Water: directly on the lake
Important: on hot days the water temperature can raise up to 30 degree

3rd stage: Kosice (Slovakia)
Size: bigger
Water: on the river Hornad
Important: Kosice has more monuments than every other city in Slovakia, meeting point the other route

4th stage: Mukachevo/Мукачеве (Ucraine)
Size: 91.000
Water: for sure a bit
Important: The city is now a rail terminus and highway junction, and has beer, wine, tobacco, food, textile, timber and furniture industries

5th stage: Cluj-Napoca (Romania)
Size: fourth biggest city of Romania
Water: some streams and a river, more important are the mountains and the forrest surrounding the city
Important: 45 000 students are living in the culture-city

Route No VI.: Oscar the Grouch

Start: Bayreuth (Germany)
Size: not to big
Water: River, small rivers and a lake in the park
Important: the Richard-Wagner-Festival takes place until the 28th of august

3rd stage: Kosice (Slovakia)
Size: bigger
Water: on the river Hornad
Important: Kosice has more monuments than every other city in Slovakia; is meeting point with Grover

5th stage: Targu Mures (Romania)
Size: medium / big
Water: River Mieresch, Lake and a subterranean water
Important: there you find the biggest Hungarian minority and the city was in the history a party of Hungary in places.

After Kermit and Cookie Monster we’re happy to announce the 3rd and 4th route for Tramprennen 2012: Welcome Ernie & Bert!
Starting in Leipzig and Dresden, these two routes will lead us mostly through Poland and Ucraine. crossing the Carpathian Mountains, whoop whoop!

The Route on Google Maps

2nd stage: Zamosc (Poland)
Size: small
Water: there is a lake (at least seen on Google Street view :P )
Important: the city is listed as UNESCO world heritage since 1992

5h stage: Carei (Romania)
Size: small
Water: not sure about that
Important: a Romanian football player was born in Carei

The Route on Google Maps

1st stage: Opole (Poland)
Size: medium
Water: the Oder River changed its direction after a flood to the West in the 16th century. 400 years later, the people followed ;)
Important: the Penny Bridge

First off, the theme of this year’s race: the heroes of our childhood days – the Sesame Street muppets! :)
Route No.I: Kermit the Frog, starting in Copenhagen!
Route No.II: Cookie Monster, starting in Gent!

We have chosen the routes randomly and we have no clue what to expect there. Maybe you’ll see the most beautiful village in the world, maybe the most terrible city you’ve ever seen…But to be honest: We don’t care. Isn’t that the reason of travelling, to expect nothing except the unexpected? It’s up to you to make it a special journey: Welcome to the playground called planet Earth! 8 Billion people worth to get to know, billions of birds and plants, of trees and leaves, lakes and seas! The goal is not to reach a specific place, but rather to go on an inspirational journey. And we’re looking forward to be on the road for two weeks with many many great people and hopefully you aswell!

Start: Gent (Belgium)
Size: third largest city of belgium
Water: where the rivers Schelde and Leie crossing
Important: Gent is known as “the proud city” and “the city of flowers”

5th Stage: Oradea (Romania)
Size: medium
Water: the river Crisul Repede is crossing the city center
Important: since 2008 there are trams of type ULF in operation